I saw you for the last time in January 2008, at the funeral of our grandfather.
We were seated next to each other at the kitchen table.

I was busy preparing a souvenir video. You helped me.

It was more than three o’clock in the morning. You asked me why I was trying to finish a project too big for the little time I had before me.
I replied, “So that we can see Grandpa at least once as we knew him before the disease, before Alzheimer’s.”

If I saw you again today Marilyn, could I recognize you?

Tonight I look at pictures of you. What’s going on in your life right now? Are you even still alive?

These images are precious. I do not know if I will have others one day. I wish I had more.

If you have reasons for not coming back, I will understand them, but say something, please.
If a tragedy hit you and maybe shame stifles you, know that the past does not matter. Only the present and the future count.
If you are forced into silence, please know that I will continue to look for you, telling myself that even in the darkest hours some people clung to the hope that finally prevailed.

Even when something seems inevitable, there is always a light at the end of the tunnel.

I told you this sentence in February 2008, just a few days before you disappeared and I still believe in it today.

Absence sometimes gives us strength that we did not expect.

Now Playing! The film “Absences” by Carole Laganière, in which I participated following the disappearance of my sister Marilyn.

A beautiful piece of cinema with special effects on the soul! Please find the movie trailer below in French. http://www.youtube.com/watch?v=KB1Cl-ywvEc
Montreal: Excentris Cinema September 20 to 26: 6:10PM except September 24: 12:45PM, 9:10PM
Quebec: Cartier Cinema during the Film Festival of Quebec City (FCVQ) September 22: 2:00PM

I particularly salute the courage of the three other protagonists of the film: Ines Hajrovic, Deni Yvan Béchard, and Colette Sauvageau.

Carole, thank you again for your wonderful film that gives me such a great opportunity to find Marilyn. Thank you to believe in it as much as I do …

“The cinema is a dream made possible”.
Juliette Binoche (Loose translation!)

I was told rather curtly: “It is in the yellow pages.”

It’s true, after all I could also search for the phone number…

I found the detox center on the internet. I spoke to a very nice person who explained: “We accept most cases, except those that are too heavy.”

I said: “Can you please elaborate? ”

The list was relatively simple: “People who inject intravenous drugs, those who have already stayed with us and showed behavioral problems such as violence. Things like this… ”

I asked, “What is the available resource for the serious cases?”

Ah yes, the one who sends people away in the storms.

She added quickly: “You can not force anyone into treatment.”

Once I took a course with a charity organization that helps young homeless people. Their code of conduct was similar:

“We’re not here to SAVE them. We are here to meet their needs.” The person proudly claimed that she let a young woman give birth on a beach, but gave her blankets.

Really? Is this truly enough to sound happy?

I know we cannot save the whole world, but perhaps we should review our approaches?

To what extent would a homeless person, often intoxicated, make an informed decision on her own fate when she is begging, forced into prostitution, fighting, or fasting, just to survive?

And how can we trust those who enforce internment or make mandatory observation decisions when they let anyone walk in the storm?

I am starting to think that those who say “it’s not my decision” ultimately are causing this unhealthy loop where nobody can get out of anything because no one feels responsible.

I don’t know if this young woman who looks like Marilyn will decide to seek help. Whether she will accept the coffee from the charity organization. If she will consider taking a good look at the brochure or not.

I have offered financial support for her to say “I don’t want it” rather than “I can’t have it”. Will she be offered anything at all?

This type of Special Unit exists in other Canadian provinces such as Ontario and British-Columbia. It helps solve more cases of missing children and adults and certainly helps with coordinating searches over a wide area. I sincerely believe that a provincial expertise would provide better outcomes in the search for missing loved ones, especially in the precious first days of the investigation of a disappearance. Nowadays, you cannot limit the search for a missing person to a single village or a single city. And you certainly cannot afford to build fences around jurisdictions when every minute counts.

I also want to mention again that there are currently more than 600 unidentified bodies in Canada, spread in various mortuaries in the country. These 600 people may be missing loved ones who have been sought by their families for months. Or even years. Even if my family continues to believe that we will find Marilyn alive, I would like to know if she died. So I find it particularly appalling that there is still no national database for missing persons and unidentified bodies. Should families of missing persons build one? Is it up to us to create a Missing Person Unit as it exists in other provinces and countries?

If we had a special unit for disappearances in Québec, perhaps we would know a little more history behind the faces of these children, these young adults, elderly adults, or those who have vanished without a trace. Perhaps we might well find them? 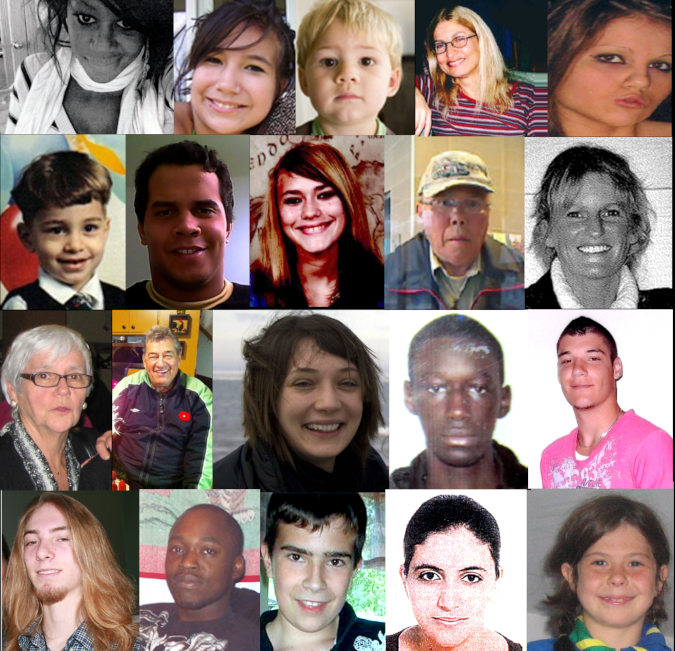 Some unresolved cases of missing people in the Province of Québec…

Please visit the website Avisderecherche.tv (in French) for a more complete list of unresolved cases of disappearances in the Province of Québec. (There are over two hundred active investigations.)

I want to thank you all for supporting our family during this difficult week that marks the fourth year of Marilyn’s disappearance. We have even received some new clues, which always encourages us to continue!
Several people asked if I knew why Marilyn has been missing for all this time. Unfortunately, I don’t. I am still considering all of the hypotheses.
Usually, a person disappears due to one or more of the following scenarios:
To escape a difficult home environment (physical, sexual, emotional); to escape from difficult living or working conditions; to start a new life under a new identity; kidnapping; parental abduction; to join the witness protection program; suicide; murder; mental illness or progressive dementia (schizophrenia, Alzheimer’s, etc…);, natural death; accident or criminal act; slavery (sexual, work, or other); to escape law enforcement; to join a cult or other religious organization, and so on.

There are hundreds of active missing people cases in the province of Québec. Although the exact cause of the disappearances are often unknown, the consequences can be very serious for the missing person, family, and friends.

Note: The content of this article and the links below are particularly difficult, and its reading is not recommended for minors and sensitive souls.

Josée asked me if we had sought out those who kidnap young women for prostitution. I thought about this scenario more than once. I even spent whole nights in bad neighborhoods around the country in search of Marilyn. In these searches, I have not seen the tip of the iceberg of the trouble, nor I have seen my sister. I will never forget the pale face of a young woman from East Vancouver who wished that someone was looking for her.

Over the years, I was told many horror stories related to human trafficking. Unfortunately, this scenario needs to be considered with the others in Marilyn’s disappearance. I will not deny that it scares me.

Here’s what happened to three young women in Québec; three stories of missing people among others. The names are fictitious to protect the identity of the victims.

Isabelle went for a job interview following an advertisement in the local newspaper. She had just finished school and was looking for a job in her field of expertise. She had been given an appointment in the afternoon. She had barely arrived when she heard the news… She had the job! Only,…another job. She was an escort and she was starting immediately. It would take her more than 18 months to escape. After the first attempt, she was thrown down the stairs, she was beaten, and raped repeatedly. Her “transport” lead her into new “exotic dancer bars” every two weeks. She worked days and nights in large cities and rural regions of the Québec province. She finally escaped after a third attempt. Despite the physical and moral wounds, she still refuses to file a complaint, huddled in fear. Her family also receives threats, ignored by local authorities. Still, life slowly resumes its course.

Lisa, a beautiful teenage runaway, was tied up in an apartment near a highway for more than a year, a victim of street gangs. Three girls were working as prostitutes days and nights under threats from their pimps, each receiving an average of twenty clients per day. Lisa was not even sixteen years old.

Jane, eighteen years old, was locked in a basement of a posh Montreal neighborhood for nearly two years. One customer finally took pity on her while he heard her whisper “mom” through her sobs. He called the police anonymously.

So many horror stories. Almost no action or prevention.

To all of those who are thinking of running away or taking off on a whim, I implore you to look for resources at school or in your circle of friends or family. Those who are waiting at the bus station to offer you a coffee or a warm place to sleep “for a few days” will not help you. They are your age, but they are lying about who they are and what they are expecting of you.

To all of those who prey on vulnerable people, please notice the sores on the legs, the puffy eyes, and the haggard look of the person that you are abusing. You have the courage to commit your illegal act, maybe you’ll find the courage to show a little heart and help the person anonymously.

For more information on human trafficking in Canada: